Mixing weed and Nyquil sounds like a good time.

And honestly it is.

We’ll break down the various uses and side effects of Nyquil, as well as how it will interact with marijuana if you take both drugs simultaneously.

The Uses and Side Effects of NyQuil

Vicks NyQuil is a common household drug that is used as a decongestant, cough suppressant, and general breathing aid.

It is a relatively safe treatment for the common cold and flu symptoms, acting as a fix-all medicine for minor illnesses.

The main effective ingredients found in Nyquil are as follows:

The main active ingredient that suppresses many of the flu-like symptoms is dextromethorphan, acting to alleviate the coughing often associated with colds and flus.

The second main ingredient acetaminophen, commonly known as the brand name Tylenol, is a pain reliever and acts to reduce fevers. 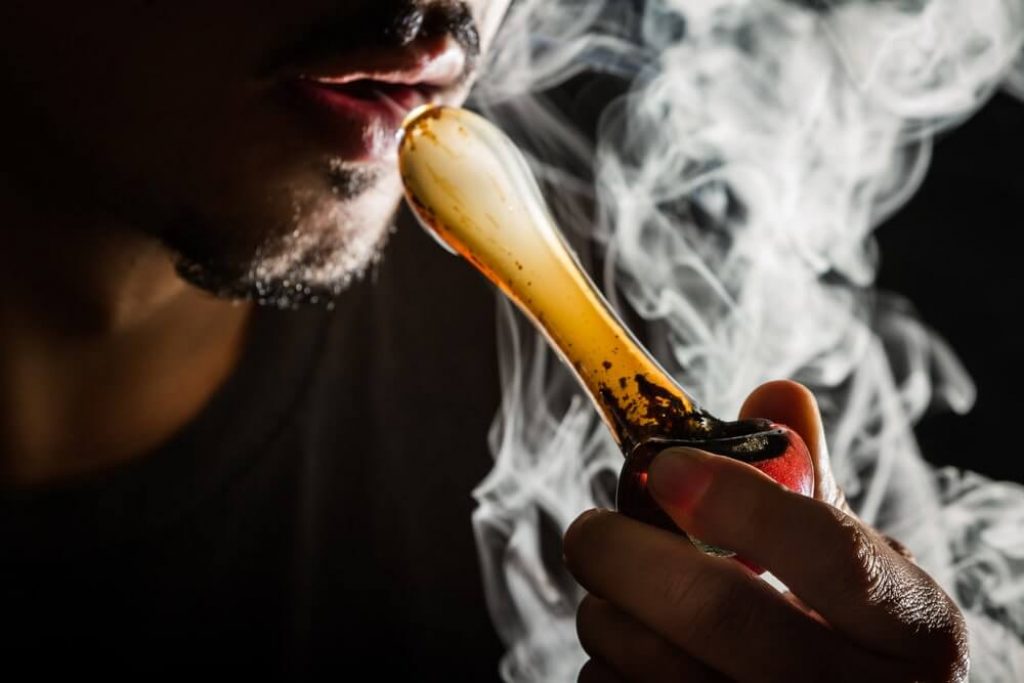 If you want to smoke weed while taking Nyquil you can without worrying about any side effects.

Smoking weed when your sick can be a good way to pain unless you get coughing fits which can make your throat feel irritated.

Instead of smoking weed while you’re sick, you can try edibles/THC gummies which are easier on your lungs and throat.

Side Effects Of NyQuil

While NyQuil does have the potential for addiction or abuse, most people don’t have any issue with OTC medications like Nyquil/Dayquil. Nyquil can cause some side effects that might overlap with smoking weed (like dry mouth).

If weed makes any of these side effects worse then you might want to back off the weed or not mix it with Nyquil.

They are as follows:

Can You Smoke Weed And Use NyQuil At The Same Time?

Because both cannabis and NyQuil are fairly subtle drugs, both with minimal side effects, the risk of a severe drug interaction is minimal and shouldn’t be a cause for concern.

However, there are some amplifying effects when combining the two, especially when it comes to the drowsiness you will feel with both drugs.

The sleeping aid in NyQuil, Doxylamine, is the ingredient that helps you feel better when you’re sick with flu-like symptoms.

If you have ever taken NyQuil over the counter, or a similar product, you can attest to the strength it carries in allowing you to fall asleep where you would normally be kept awake with a bad cough or other symptoms. 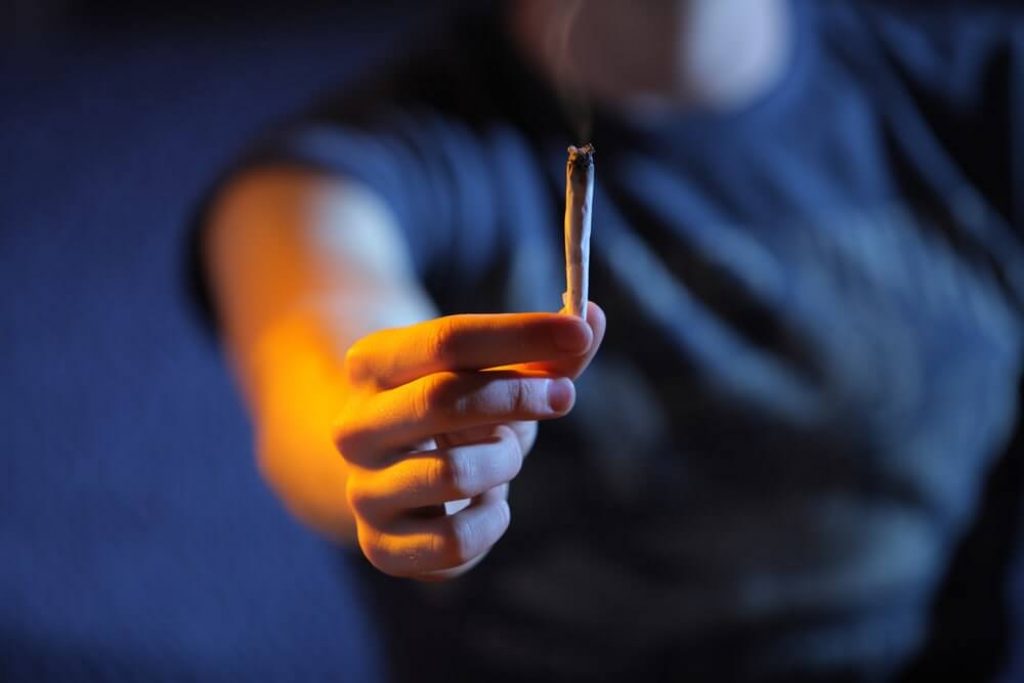 Many types of cannabis also result in drowsiness, especially with strong Indica strains. Because both carry these effects, you should be wary of combining the two unless you anticipate sleeping relatively soon after intake.

Can Nyquil Make Me Feel More High When I Smoke?

Anecdotally some have reported that NyQuil may also amplify the ‘high’ feeling associated with cannabis, however, there isn’t a lot of supporting data for the reasons why or how. It may have to do with the specific strain, with stronger body high variations seeing increased effectiveness.

The drug Dextromethorphan has also been connected to the feeling of being high (which we will expand upon below), however, this is only possible if taking abnormally large doses.

Smoking Cannabis While Sick With A Cold Or Flu

While you may not see any ill effects from mixing cold medicine such as NyQuil and cannabis simultaneously, smoking while sick may have its own set of drawbacks. Because many colds come with breathing complications, smoking can further agitate those issues.

If you have a severe cough, triggering that feeling through traditional smoking via a bong, bowl, or a joint may only worsen the feeling. Some have recommended putting ice in a bong, acting to cool the smoke you inhale and giving you a less harsh hit.

Bong manufacturers have even started including built in ice catchers due to the popularity of this trend, although you will be inhaling more moisture into your lungs while you do. Because of the increased moisture, this may also act to agitate your cough, so your mileage may vary with this method.

Can Weed Replace The Use Of NyQuil?

Because of the overlap in side effects between smoking and the use of NyQuil, some may choose to solely rely on cannabis for the treatment of the symptoms. In general, marijuana will not be nearly as effective as a cold medicine when treating all the symptoms, only helping with the sleep aid aspect. 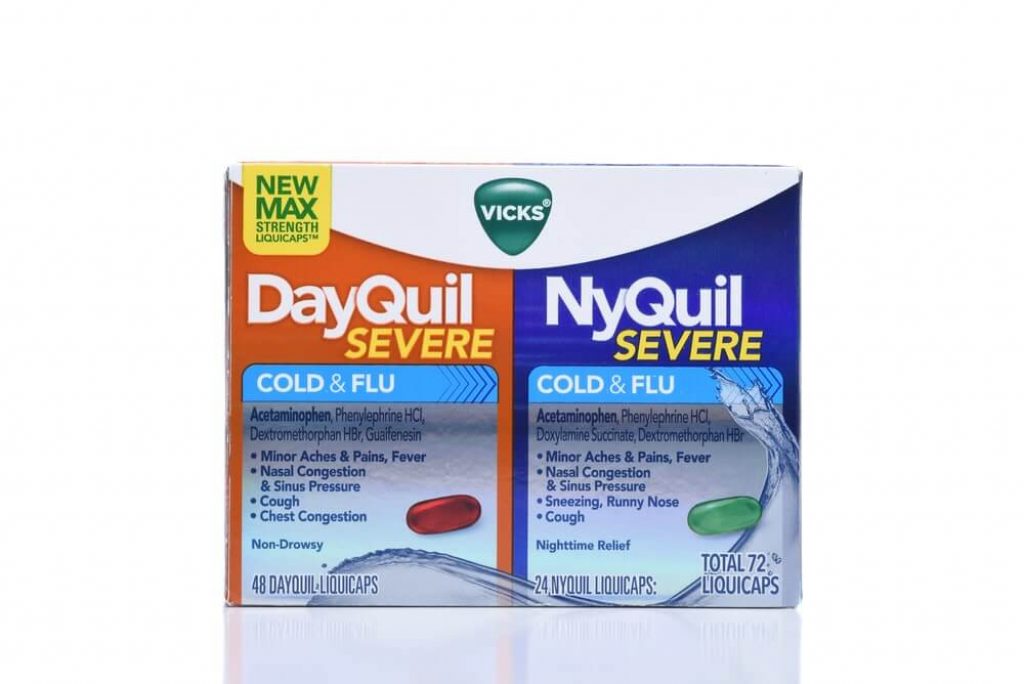 Cannabis may also act as a pain reliever, but it will not be as effective as the acetaminophen found in NyQuil. In general, the pain-relieving effects of cannabis will have a shorter duration, with THC remaining active in your system for a relatively short period of time (however it will remain traceable for quite a bit longer, which you can read about here.)

If you have mild symptoms or just a bit of discomfort, cannabis may be a suitable replacement for NyQuil, although it won’t directly treat any of the symptoms of sickness.

Should you smoke marijuana while sick?

In general, it is not recommended to smoke while sick with cold or flu-like symptoms. While it may not have any direct adverse effects on your health, it can act to prolong or agitate symptoms of coughing.

If cannabis is a regular part of your daily routine, replacing smoking with edibles, tinctures, or alternative cannabis products can help.

Can NyQuil Get You High?

If abused, many innocuous drugs can promote the feeling of being ‘high’. When taken in large doses, NyQuil becomes one of those drugs, often mixed into drinks with alcohol. 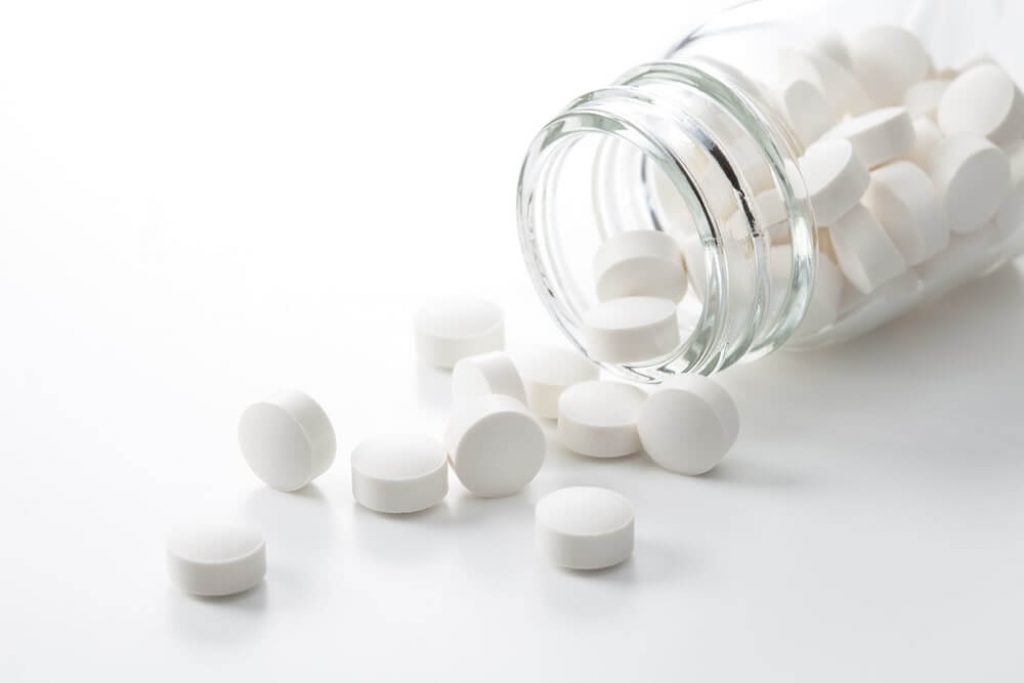 The active ingredient which promotes this feeling is Dextromethorphan, or DMX, which can bring about hallucinations or feelings of euphoria. When these large doses of DMX are taken, the effects are often compared to the illicit drug PCP and is nicknamed “robo-tripping”.

When abused, this can be extremely dangerous, leading to damage of the liver, heart attacks, seizures, or even death. Even if you don’t experience these severe medical conditions, DMX can lead to serious addiction and results in typical symptoms of withdrawal.

Furthermore, accidental addiction can result from nightly use as a sleep aid, so you should remain cautious about the consistent use of NyQuil.

What is Considered Heavy Marijuana Use?