How Are Marijuana Leaves Different From the Buds?

Most plants count on their leaves to help them grow and develop, and marijuana plants are no different. Through the process of photosynthesis, marijuana leaves turn the sun’s energy into food.

The leaves store food in plants and through transpiration help to cool them. They also produce a flowering hormone called Florigen when light exposure is reduced to less than twelve hours.

Once marijuana plants produce buds and near harvest, however, the leaves are often forgotten. And that’s too bad, because the leaves of the plant still offer plenty of potential.

For example, depending on the type of leaf, they can be used in a variety of capacities:

In fact, cannabis leaves can even be smoked!

Cannabinoids are All Over the Plant!

When it comes to marijuana cultivation, a great deal of attention is given to developing large, potent buds. It’s the whole purpose of the work you put into it.

Surprising as it may be, however, with the exception of the roots and inside the stems, cannabinoids can be found throughout the entire plant. This is because of the presence of resin glands which produce the trichomes that can be found coating the leaves, buds and branches of cannabis plants. 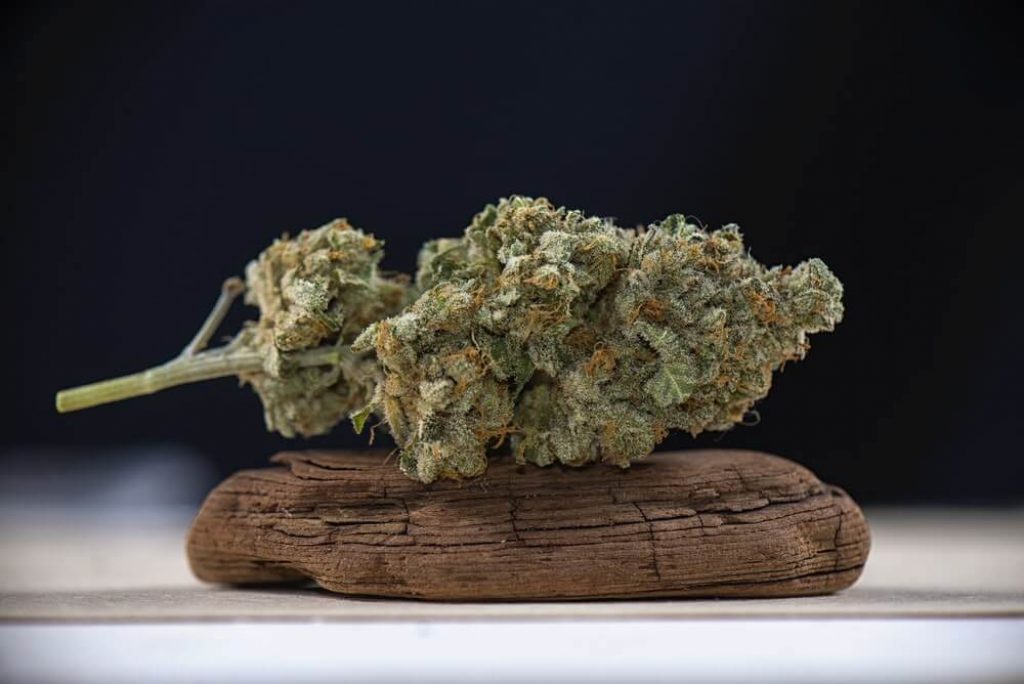 It is from the trichomes that we extract the cannabinoids CBD and the euphoria-creating THC as well as the terpenes.

There are three categories of trichomes in a cannabis plant:

Contrary to what their name suggests, the bulbous trichomes are the smallest of the three. They can’t be seen with the naked eye, but they are located all over the surface of cannabis plants.

Capitate sessile trichomes are larger than the bulbous type but are still quite difficult to see. Capitate stalked are the most abundant of the three trichomes and the ones growers are most familiar with.

These trichomes are home to the desirable CBD and THC compounds the plants are cultivated for. They can be found on the flowers of female plants as well as on the small sugar leaves that surround them.

It is the capitate stalked trichomes that give buds their glittery, sugary appearance. The color of these trichomes also indicate to growers the best time to harvest the plants for the buds.

Did you think it is the leaves they are after?

The Confusion About What Part of the Plant You Smoke

The iconic, seven-lobed cannabis indica leaf has been around for ages. Doodled on school notebooks, as graffiti on walls, and imprinted on tee-shirts, it has long served as a cultural meme, alternately a symbol of rebellion, defiance, and activism.

Even today, the green cross that has come to denote medical marijuana is often paired with a cannabis leaf. It’s that recognizable.

And that’s why if your only experience with weed is through the purchase of ready-to-roll-and-smoke baggies, you might be forgiven if you thought it was the leaves rather than the buds you were smoking.

After all, if you’ve ever seen shade or broadleaf tobacco harvested, it’s tobacco leaves that make up both wrapper and filler.

What Are the Types of Marijuana Leaves You Can Smoke?

There are two types of marijuana leaves, including the small sugar leaves that surround the bud and the larger, more-pronounced fan leaves that are so vital for bud development.

Sugar leaves are the very small leaves that develop in and around buds during the flowering stage. Unlike fan leaves, you’ll find they are covered with sticky, sugary-looking trichomes which is where they derive their name.

Often those that stick out from the buds are trimmed away during a weed harvest as their removal both increases the quality of the colas or buds as well as decreases the likelihood of mold developing.

However, because these leaves are trichome-rich, some home cultivators figure it’s worth it to smoke them. Smoking sugar leaves can get you high, but keep in mind you’ll have to smoke a lot of it to get much of a buzz. It’s not the greatest prospect, especially if your first experience smoking marijuana didn’t get you high. Also, you should be prepared for a harsher smoke that may leave a bitter taste in your mouth.

If the idea of smoking sugar leaves doesn’t appeal to you, then you may want to consider them for making your own hashish. In fact, that’s what commercial growers use their trimmings for. They also work great as edibles.

The main purpose of fan leaves is to absorb light and turn it into energy to grow plants. They help develop the buds directly below them.

Once buds are large enough, however, they no longer need to rely on fan leaves and often fan leaves can be trimmed off. This practice helps expose leaves further down the plant to greater sunlight.

Unlike sugar leaves that are often covered with trichomes, fan leaves tend to have only trace amounts. If you don’t get much of a high from smoking sugar leaves, you’ll get even less from fan leaves.

But that doesn’t mean you should throw them out! There are other alternative options for fan leaves.

Are There Other Alternative Options?

Didn’t we just say so? Let’s take a closer look at better ways to get high from marijuana fan leaves.

Most fan leaves contain few if any of the most potent type of trichomes, but there are exceptions so it’s worth inspecting them, especially the stems. As noted earlier, however, cannabinoids even in small quantities are located all over marijuana plants.

If you have a bag of trimmed fan leaves, you’ll have more than plenty to make a batch of cookies or other baked treats. And the good news is that the cooking process will extract most of the potency from them.

Stems from your plants can also be added to cannabutter used in baking.

If you have a great deal of leaves, you can extract the trace amounts of resin that remain on the leaves and stems and make your own THC-rich ice-o-lator hashish.

You can make it a work party by doing it with a group of friends (just be sure to have a ready-made batch of weed brownies on hand for your guests) or you can go the easier route and invest in an ice-o-lator hash making tool.

Either way, the leaves won’t be wasted.

Contrary to popular belief, cannabis leaves, and for that matter the entire plants, don’t contain THC, the cannabinoid responsible for giving you that great euphoric feeling. Instead, the leaves contain the cannabinoid acid THCA.

It is through the process of heating cannabis, also known as decarboxylation, that it is converted to THC. That process happens automatically when you light a joint or bake cannabis in your brownies. 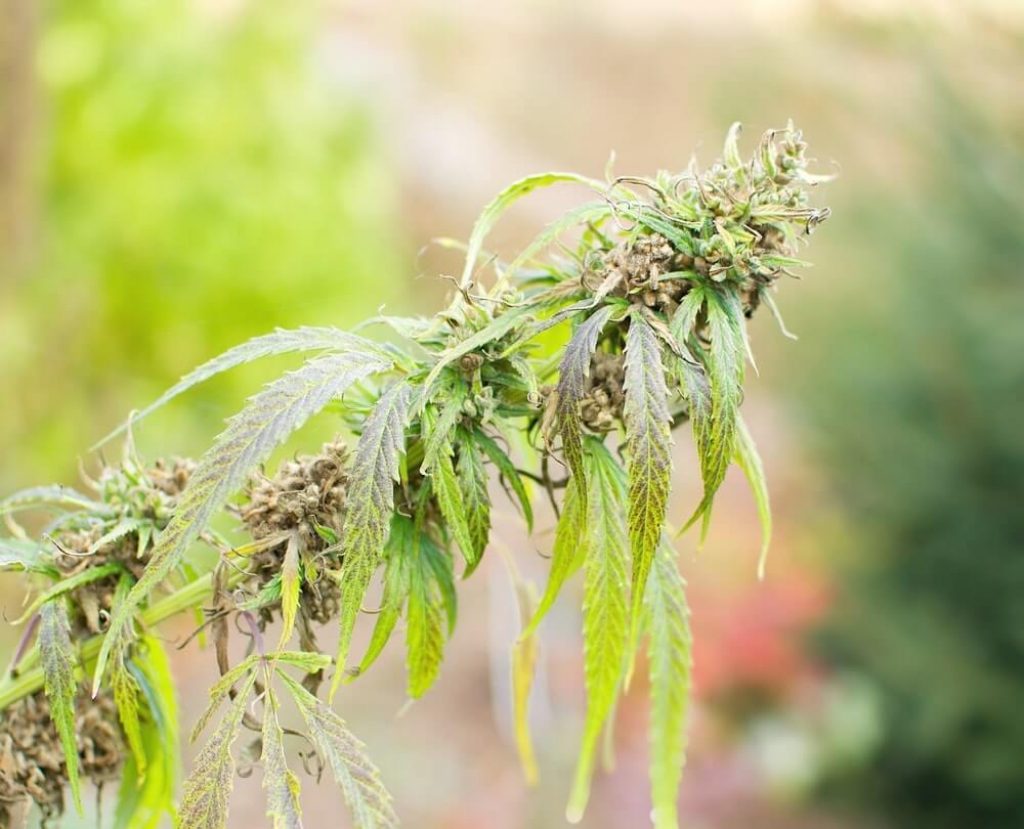 It won’t happen, however, if you just toss some leaves in a salad. If your sole interest in ingesting marijuana cannabis leaves is for its psychoactive effects, then you’ll have to decarboxylate them in your oven.

As your mom might say, “It’s important to eat your greens!”

When Is the Best Time in the Plant’s Life Cycle to Smoke the Leaves?

Most of the trichomes that contain the THCA compound don’t develop until the plants’ flowering stage, so if you somehow end up with leaves from before that stage, their best use may be for salad greens or to be saved for composting for your next crop.

The best time to smoke leaves is after they are harvested and properly cured. You’ll have a good idea when to harvest based on the color of the trichomes.

The leaves will need to be dried and then stored in airtight containers in a cool, dry, dark location. If you follow that practice, while you may not get as great a high as you would from the harvested buds, you’ll enjoy a mellower taste that will be easier on your throat.

According to the USDA, American consumers waste between 225 and 290 pounds of food a year. That’s one sobering statistic.

Yes, you can smoke sugar and fan leaves, but if the low THC content isn’t for you, there are options. And with so many great uses for cannabis, using the entirety of your plants is a good sustainable process that should make you feel proud.