This leads many, naturally, to wonder if there’s any limit as to how you can introduce marijuana to your system. One such method of use requires not going through your mouth, but rather through your nose.

The Right and Wrong Ways of Inhaling Cannabis

It’s not terribly uncommon for marijuana users to inhale smoke through their noses. What’s important to remember, though, is that there is both a right and wrong way to do so.

The right method of inhaling is not only going to help you to enjoy the process a bit more, but it’s also going to be significantly safer than doing things the wrong way.

Given that it’s possible to inhale marijuana smoke, it’s usually a good idea for first-time smokers and for anyone who is going to be around other smokers to have at least a basic idea of the different ways to inhale. Doing so, as you might imagine, is going to directly impact your experience with cannabis as you go forward.

The right ways to inhale cannabis

If you’re smoking marijuana, you’re going through a process that requires the smoke to get to your lungs. While you might think that such a process is self-explanatory, you can watch the sputtering coughs of many first-time smokers to see just how difficult such a process can be. Thankfully, getting to the point where you can inhale properly just takes a little bit of preparation and experience. 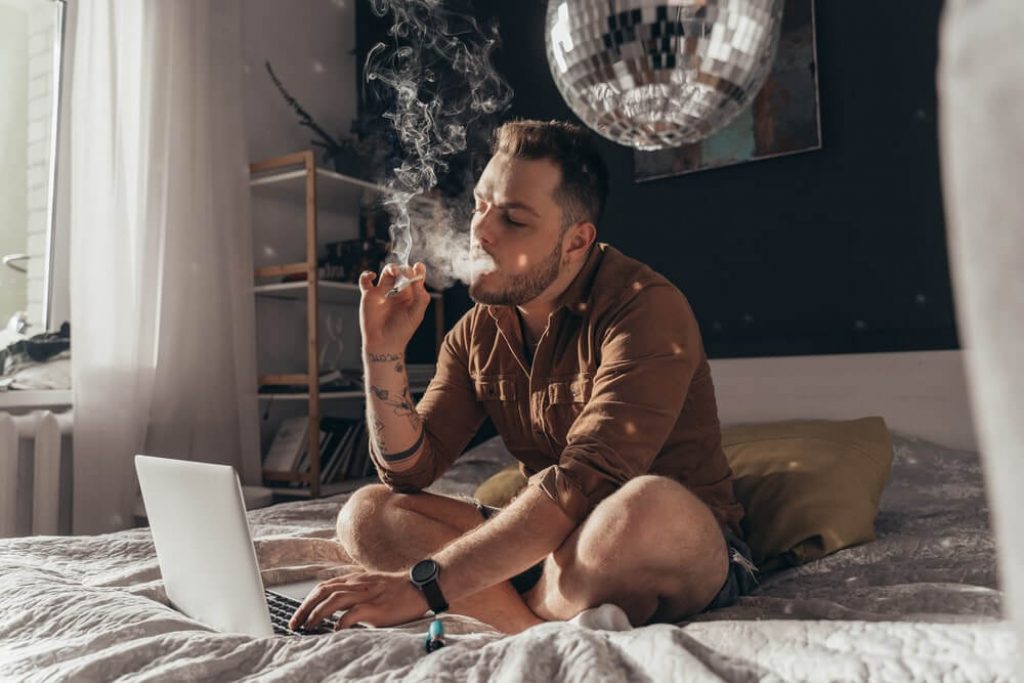 To properly inhale, you’ll start by taking a deep breath. Inhale until you feel like your lungs are full but not bursting, then take in a little more air. You’ll pause briefly, then slowly exhale to let the smoke out. Many people refer to this as the ‘four two four’ method because smokers often breathe in for about four seconds, pause for about two seconds, and then slowly exhale for another four seconds.

The wrong ways to smoke cannabis

Now that you know the right way to inhale, you can start thinking about all the mistakes that others make. The biggest and most important thing to avoid is going too big.

If you’re taking a huge breath that makes your chest feel like it is about to burst, you’re not actually improving your high – instead, you’ll just be causing yourself to rapidly exhale before the marijuana smoke can really penetrate the tissues of your lungs.

Remember, inhaling isn’t about proving that you can do something. Inhaling is actually about ensuring that you properly deliver the cannabis to your system so that you can feel the effects for which you have paid. If you find yourself inhaling too deeply or too shallowly, you’re essentially wasting part of the product and leaving yourself in an uncomfortable position.

Is it bad to exhale cannabis smoke from your nose?

You probably know someone who has mastered the art of exhaling smoke through his or her nose. It might look cool and he or she might claim that it makes a major impact on his or her experience, but it’s still something that’s worth investigating before you give it a try.

This means not only some powerful irritants, but also the heat that comes from smoke. This isn’t really a great thing to do to the environment inside your nose, as the smoke can dry it out or even aggravate some of your allergies.

As such, it’s generally a better idea to avoid exhaling this way when possible.

Yes, it is entirely possible to be allergic to marijuana. In fact, there are many people who experience reactions any time that they encounter the plant in any form. If you’ve never smoked or ingested marijuana in the past, it’s a good idea to figure out what an allergic reaction actually looks like so that you can be sure to stay safe when you are smoking.

Allergic reactions to cannabis vary quite considerably. For some, they take the form of red, water eyes or coughing – both issues that are fairly common when you’re inhaling marijuana.

For others, it might mean rashes or itchiness. There are enough symptoms that it is very easy to mistake a marijuana allergy for any other kind of allergy, so it’s usually a good idea to take a break from smoking if you experience symptoms just so you can figure out whether or not the cannabis was actually the cause of your problems.

It’s also a good idea to address the idea that long-term usage can lead to marijuana intolerance. While it’s hard to necessary look at everyone who smokes and to say that everyo0ne will eventually develop an allergy, there’s something to be said for the development of sensitization.

The idea here is that the more time you spend around marijuana, the more sensitive you will get to its effects. That doesn’t mean that you will have an allergic reaction, but it might mean that you are more likely to have a reaction if your were already prone to do so.

It’s a difficult thing to parse, but it is something to keep in mind if you are going to be in environments in which marijuana is readily available.

What would happen if someone inhaled marijuana smoke through their nose? Would it give a better, equal or worse high to directly sniff the marijuana smoke?

When you inhale marijuana smoke, your goal is to get it into the tissues of your lungs. When you inhale through the mouth, you’re able to take in a great quantity of air and push it down quickly.

If you do the same thing through the nose, though, you’re not likely to get the same amount of smoke or to get it in a sufficient-enough quantity to actually have an impact. As such, the most likely outcome of just trying to inhale marijuana smoke through your nose in a regular environment is that you’re going to end up not actually getting high at all.

This is a tough question, as the answer isn’t as simple as you might think. If you’re just in an area in which you are exposed to marijuana smoke in passing and you inhale, you’re probably not going to fail any drug tests.

If you’re purposefully trying to inhale smoke, though, the answer might be different. The reason for the difference, though, is that you’re going to have to try to inhale a tremendous amount of smoke in a short period of time to actually get any kind of effect, and that amount of smoke would probably contain enough THC to show up on a drug test. 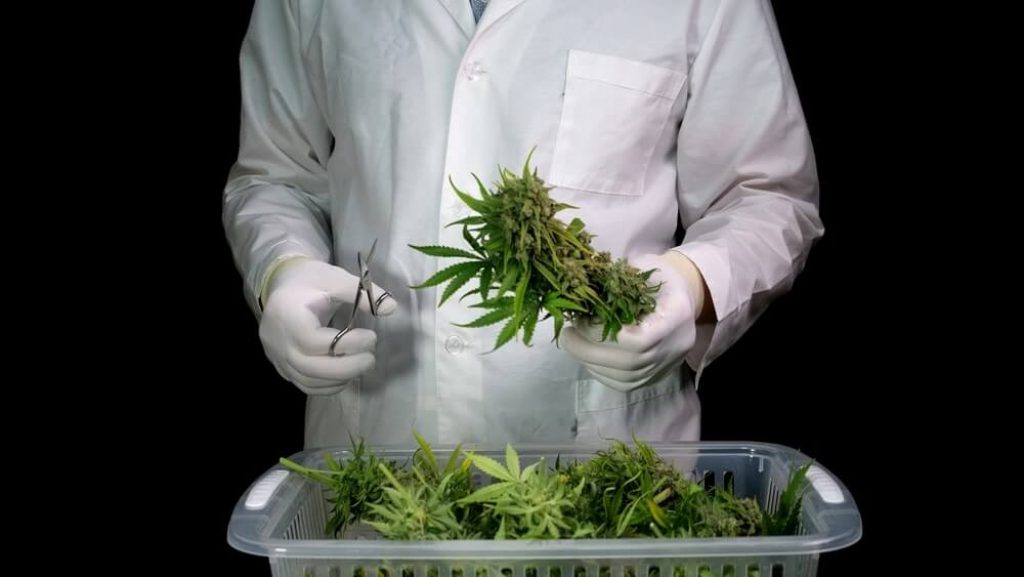 In most cases, though, you’re going to end up irritated, not particularly high, and safe from the average drug test.

Is it healthier to smoke through your nostril?

No, it is absolutely not any healthier to smoke marijuana through your nostrils. While the idea of keeping your esophagus safe from smoke is probably a good one, the truth is that all you are doing is changing out one system for another.

If you’re looking for simple safety, the truth is that there’s no smoking of any type of marijuana that’s going to make a doctor happy, so you’re just looking for the risks that you are willing to take. Added to this is the fact that just trying to smoke through your nostril is incredibly unlikely to produce any effects and you’ll find yourself putting your body at risks without any kind of reward.

So what are exactly the problems with exhaling smoke through your nose?

Exhaling smoke through your nose is a problem because you’re exposing your nose to smoke. First and foremost, this means that you’re exposing a fairly sensitive bit of your body to high heat and irritants, which in turn can lead to drying out, irritation, and even potential damage.

You’re also exposing your nose to plenty of things for which it was not designed, which can in turn lead to some interesting health reactions like a runny nose or sneezing. In all honesty, your mouth is probably just a bit better designed to deal with smoke than your nose – but neither system is particularly suited for the process.

For safety’s sake, though, exhaling through your mouth is probably a better choice for most.