Does Smoking Weed While Breastfeeding Affect the Baby?

So you’re going to be a Mom – Congratulations! Chances are if it’s your first time, you have all sorts of questions about pregnancy, childbirth, and how best to care for your baby after she’s born.

If you smoked weed before you were pregnant and you plan on breastfeeding once your child is born, you may be wondering if you can resume smoking at the same time. It’s not an unreasonable question.

Is It Safe for Mothers Who Use Marijuana to Breastfeed?

We hate to disappoint you, but in the interests of your baby’s health, the answer is no. THC, the chemical that gives you that wonderful feeling of euphoria, will show up in your breast milk when you use it. And while it isn’t a huge amount that accumulates, it’s not good at all for that little bundle of joy of yours.

Don’t fool yourself either. If you’re one of those people that doesn’t get much of a high from marijuana, don’t think you can ignore this advice because your higher tolerance will be passed on to your baby. 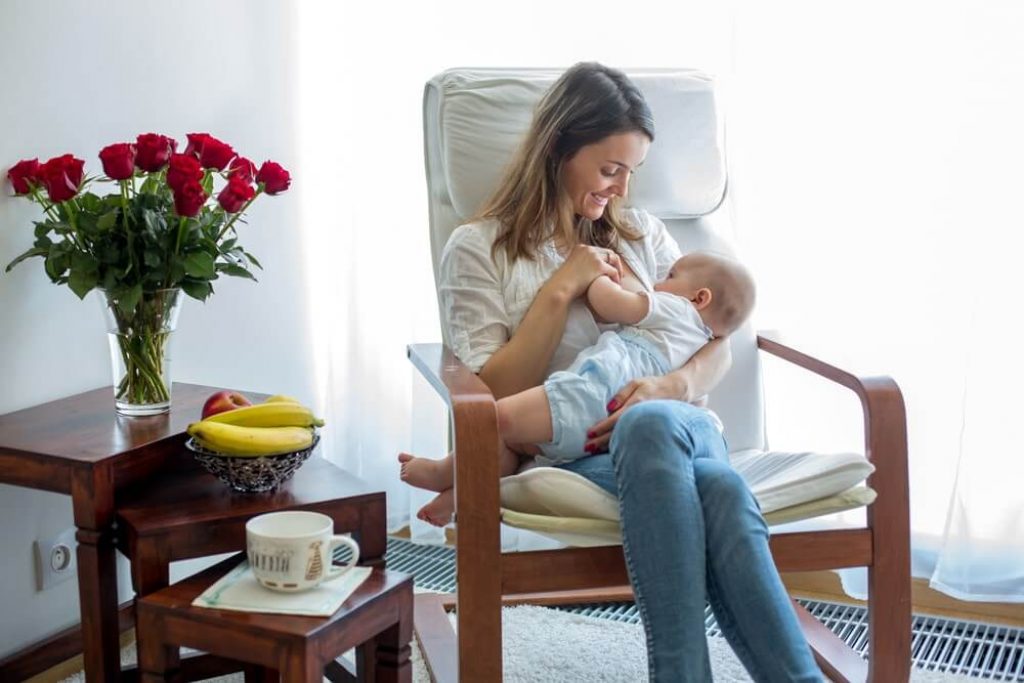 While every person’s individual reaction to cannabis is different, it’s just common sense that a baby will react to a small exposure.

But don’t let that dissuade you from breastfeeding. It’s one of the best things you can do for your baby to give him a good start in life.

You’ll have to make a number of sacrifices for your child in the coming 18 years and beyond. Giving up cannabis use for the duration of your breastfeeding period can be your first.

There is a significant amount of development that goes on in babies’ brains, and studies have found that early exposure to cannabis can debilitate growth. Exposed to it early on, THC can produce long-term changes in a child’s behavior as well as his mental health.

Babies can become drowsy during feedings and not eat enough. They may be slow to gain weight. Studies have also found a possible link between cannabis exposure and Sudden Infant Death Syndrome (SIDS).

Aside from those very serious concerns, there’s the fact that cannabis may have any number of heavy metals or other contaminants present when smoked or ingested. These too can be passed to a baby during breastfeeding.

Why Can’t You Just Pump and Dump?

It’s funny how just a glass or two of wine, beer, or liquor can loosen up even the most straight-laced among us, making them more social, and certainly more talkative. Weed can make you more sociable too, especially Sativa strains.

This happens because both alcohol and the THC in weed are drugs that cause the brain to release more of the neurotransmitter called dopamine. It’s the reason you get that feel-good buzz.

Once a breastfeeding mom has alcohol, caffeine, or other drugs in her system, she can pass them to her baby through her milk. So new mothers who want to enjoy an occasional glass of wine have to consider the dangers she may be imposing on her little one. 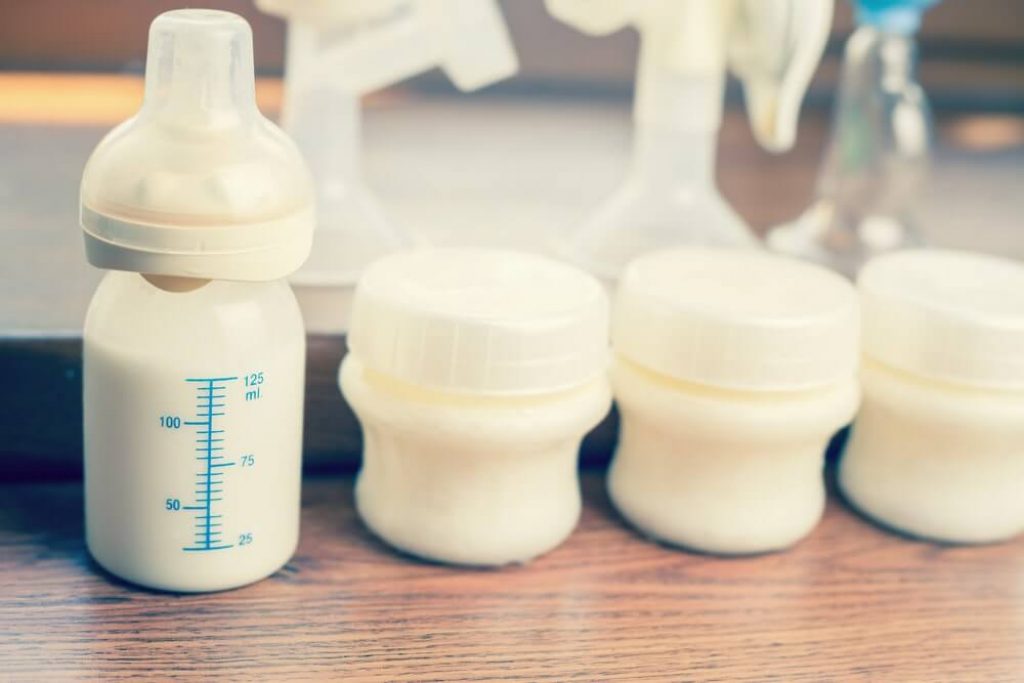 In the meantime, they can either formula-feed their infants or feed them previously-stored breast milk that is untainted.

Pumping and dumping aside, a breastfeeding mom who wants to enjoy a drink can best protect her baby by holding off drinking until just after she has been fed. It generally takes about two to four hours for toxins to metabolize out of breast milk, so her milk should be safe by the time the next feeding rolls around.

Here’s the problem, though, with THC. It just doesn’t work its way out of the body as quickly as alcohol does.

A study on THC in breast milk published in the peer-reviewed medical journal, Pediatrics, found that as many as six days after marijuana was last reported being used, THC was still present in 34 out of 54 of the samples. That’s 63 percent! A similar smaller study from 2018 and published in Obstetrics and Gynecology produced similar findings.

There’s simply no point in pumping and dumping if you’ll have to do it for days on end. Say what you want about THC. It has staying power.

When it comes to using cannabis products of any kind, respected health organizations are all on the same page–don’t use it for the duration of your breastfeeding. This includes products with CBD in any form.

This includes advice from:

What About CBD Oil and Breastfeeding?

CBD oil has many uses. It’s used to relieve pain, to treat anxiety, depression, and sleep disorders. There’s also some evidence it can be helpful in treating serious diseases like multiple sclerosis, epilepsy, Parkinson’s, and Alzheimer’s.

There’s also another reasonable concern. CBD is, for the most part, not regulated by the Food and Drug Administration.

As a result, CBD products carry the potential of being contaminated by THC. And that could be risky for a baby.

What About Smoking Marijuana Around a Formula-fed Baby?

Marijuana may be legal in several states, but it’s still prohibited under federal law. And that fact can hamstring researchers from conducting adequate studies.

Despite that drawback, a study in pro-cannabis Colorado on the urine samples of 43 children between the ages of one month and two years hospitalized for bronchitis at Children’s Hospital Colorado found 16 percent of the subjects tested positive for marijuana metabolites, meaning there were traces of THC in their urine. Parents of the children were also required to fill out a questionnaire indicating whether they or another caretaker exposed the children to marijuana use.

Those parents who indicated they used marijuana were found to have a strong association with the children who tested positive. 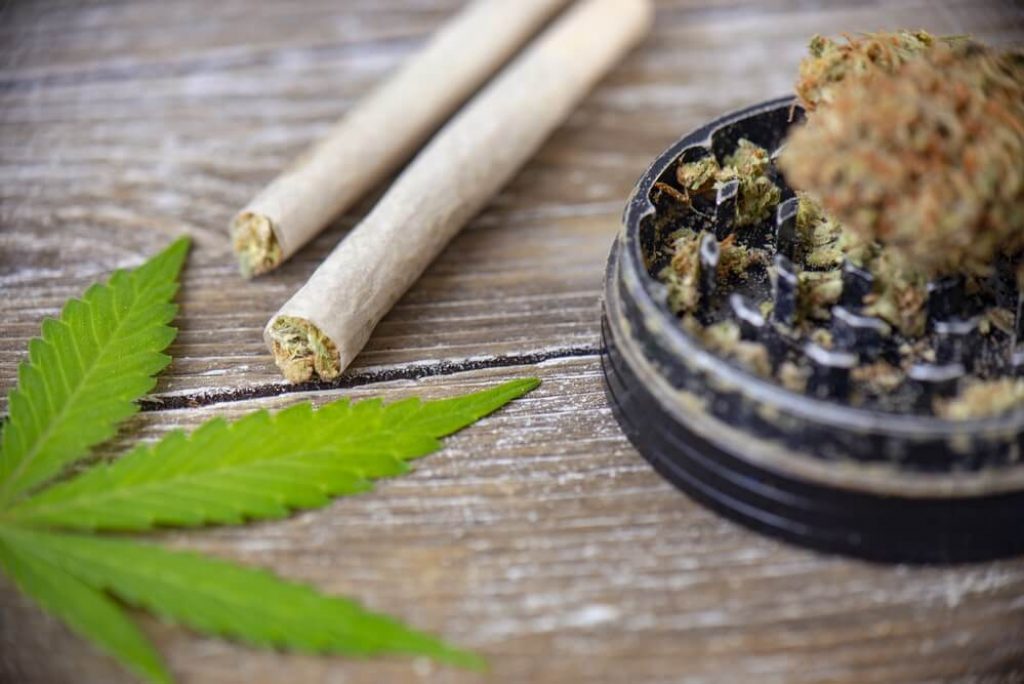 Studies aside, smoking marijuana around formula-fed babies and children, in general, isn’t recommended. After all, plenty of evidence already exists about the dangers of second-hand smoke from cigarettes.

The operative word here is smoke. Any way you slice it, smoke is bad for the respiratory system.

And that includes smoke in the air as well as third-hand smoke that clings to clothes, furniture, and toys. If you’re going to smoke, it’s best not to negatively impact the air quality for your children inside your home or vehicle.

On a side note, because federal law still prohibits cannabis use, all states, whether they have legalized it or not, are required to establish reporting policies under the Child Abuse and Prevention and Treatment Act (CAPTA) when children are exposed to illegal substances. This includes marijuana.

What Should You Do If You Use Cannabis Medicinally?

We’ve already touched on the many health benefits that exist from cannabis use, and we haven’t even listed everything. That being said, there are serious risks to exposing your baby to breast milk that could have traces of THC.

And exposing them to secondhand smoke isn’t any better.

If you use cannabis medicinally such as for treating anxiety, speak to your health care professional about creating an alternative plan for dealing with such issues. There may be other products on the market that don’t have THC as an ingredient that can both help you and keep your baby safe.

Cannabis use continues to increase in both legality and social acceptability. In fact, among breastfeeding women, marijuana is the most commonly used recreational drug. So if you want your breast-fed baby to be healthy, it’s important to get the skinny on how your weed use can affect him.

Because THC can remain in breast milk for several days after using cannabis, health and medical organizations across the board strongly discourage its use in any form while breastfeeding.

If you have any questions or concerns whatsoever about using cannabis products while breastfeeding, talk to your doctor or your child’s pediatrician.