As in everything we learn in life, knowledge is power. Today we’ll look at nitrogen toxicity and why it’s important to learn the ABC’s of identifying, fixing, and preventing it from occurring in the first place.

What is Nitrogen Toxicity?

An overdose is never good, and that’s exactly what nitrogen toxicity is–an overdose of nitrogen. Feed your plants too much nitrogen, and it can kill your plants.

The Warning Signs of Nitrogen Toxicity

Your plants will let you know they are experiencing nitrogen toxicity. You just have to speak their language–and it will be written in their leaves. Common signs of nitrogen toxicity include:

How Much Nitrogen Do Marijuana Plants Need?

Marijuana plants need nitrogen throughout their entire life cycle. However, they need different amounts during different phases of their development. In addition, certain strains and species of cannabis require specific amounts of nutrients.

In general, plants will require a lot more nitrogen during the vegetative phase, as they will use it to develop stems, branches, leaves, and a healthy root system. Fortunately, nitrogen is fairly easily absorbed by roots and can move about within the plant structure to wherever it may be needed most at any given time.

In fact, it is difficult to overfeed your plants with nitrogen during the vegetative phase of their development. 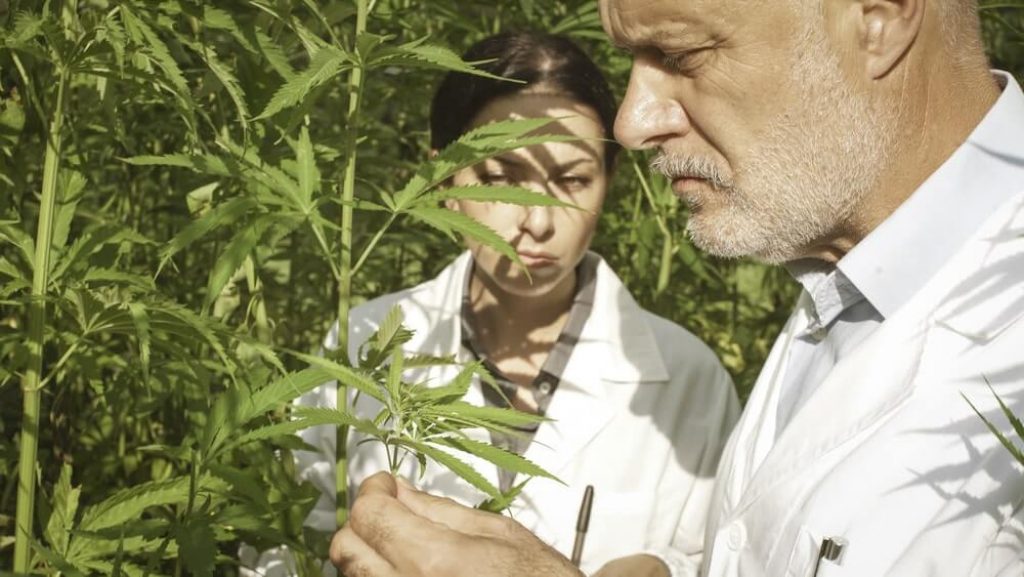 However, once your plants move into the flowering and blooming phases, they will not require nearly as much nitrogen. If you use store-bought nutrient solutions, you’ll see a set of three numbers that indicate the ratios of NPK – nitrogen, phosphorous, and potassium in the solutions in that order. When your plants move into the flowering stage, make sure you switch over to either a “Bloom” or “Flowering”-labeled nutrient solution with a lower nitrogen concentration.

As noted at the outset of this article, nitrogen is a very important nutrient for the development of weed.

Specifically, nitrogen plays a major role in the production of both chlorophyll and amino acids. Chlorophyll, which is responsible for the green color in leaves, allows plants to absorb sunlight and through the process of photosynthesis, converts it into energy that helps plants grow.

Amino acids build proteins that support the cellular strength of plants, stimulate their metabolism, and promote energy generation. Nitrogen is therefore essential for the germination, flowering, and bud development of cannabis, and plants that do not get enough of this essential nutrient will wither and produce smaller yields.

Plants that don’t get sufficient nitrogen may also die.

Cannabis naturally puts greater focus on the highest leaves of their plants as these have access to the most light and can therefore make the best use of photosynthesis. If a plant is experiencing nitrogen deficiency, these leaves will take what little nitrogen there is left for themselves, shortchanging older, lower leaves on the stem.

If you begin to see these older, lower leaves begin to yellow, wilt, and drop, it is likely a sign of a nitrogen deficiency.

This is not necessarily a problem in the later phases of the grow cycle, but if it is happening during the vegetative phase, it can turn into a serious problem. Left unchecked, leaves further up the stem will yellow as well and whole plants will become stressed.

The best way to prevent or rectify such a problem is to get your plants on a diet that includes a well-balanced, multi-staged nutrient product. Caught early and fed the right balance of nutrients, your plants may recover.

The Only Time You Want a Nitrogen Deficiency

Say what? with all the good things that nitrogen does for weed, why would you want to deprive your plants of this critically important nutrient?

The answer is less about why than about when. The only time you’ll want your plants to develop a nitrogen deficiency is late in the flowering stage, usually somewhere between the eighth and tenth weeks of flowering.

The reason for this is that you want to get the chlorophyll out of your leaves. As noted earlier, nitrogen is important in the development of chlorophyll, which plants require for photosynthesis to occur.

Unfortunately, chlorophyll also has a somewhat icky smell, a bit like hay, and if you don’t get it out of your plants just before or after you harvest them, you’ll end up with a bitter smoke and an unpleasant aftertaste. 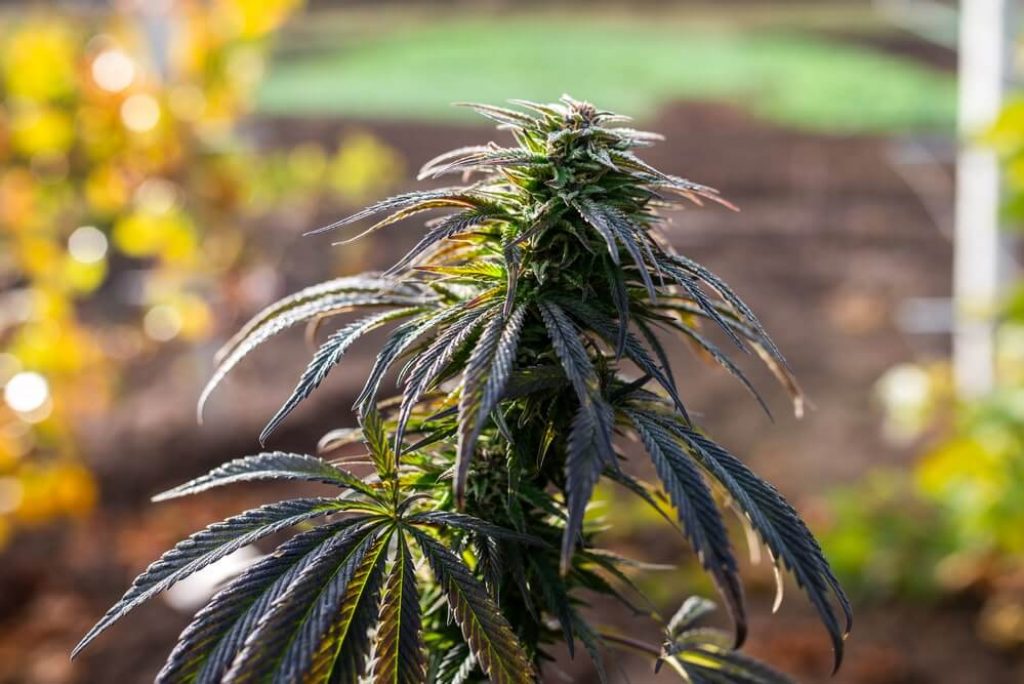 You can force a deficiency by beginning watering your plants with only a small amount of nitrogen in these later weeks. Your leaves will begin to yellow, but in this case, it will be a good thing.

The goal is to get as much chlorophyll as possible out of your plants so they taste and smell better. For this reason, don’t let your eagerness to smoke those big beautiful buds cause you to rush the drying process.

Nitrogen Toxicity is the age-old story of loving someone–or in this case, some plants too much. And it doesn’t just apply to soil-based grows.

The Role of pH and Nitrogen Issues

Nitrogen deficiency or toxicity can be bad enough, but matters only get worse if your plants have pH issues as well. This can be particularly challenging for those who use hydroponic grow systems.

Soil-based grow systems provide a little bit of a buffer for roots to absorb nutrients, but hydro as well as aeroponic-grown plants depend on a constant 5 to 6 pH in order for their root zones to absorb the proper nutrients. It’s the same story all over again.

If the pH isn’t right, the roots cannot take up nitrogen, and the plants suffer.

How To Fix It

Just like their counterparts, soil-less plants also require different levels of nutrients at different phases of their development. Once again, a nutrient solution can solve the problem.

Hydro nutrient solutions are usually a blend of the big three NPK macro-nutrients along with some trace minerals and secondary nutrients like magnesium, calcium, and sulphur. While it is possible to create a homemade nutrient solution, many growers find it just as easy to purchase inexpensive, pH-balanced hydroponic nutrients online.

Why You Should Treat And Prevent Nitrogen Toxicity

Is it your goal to produce tiny-sized buds? Of course, it isn’t! Unfortunately, if you feed your plants too much nitrogen during the vegetative stage, they won’t grow as heartily, and that’s what you’ll get–buds of much smaller size. 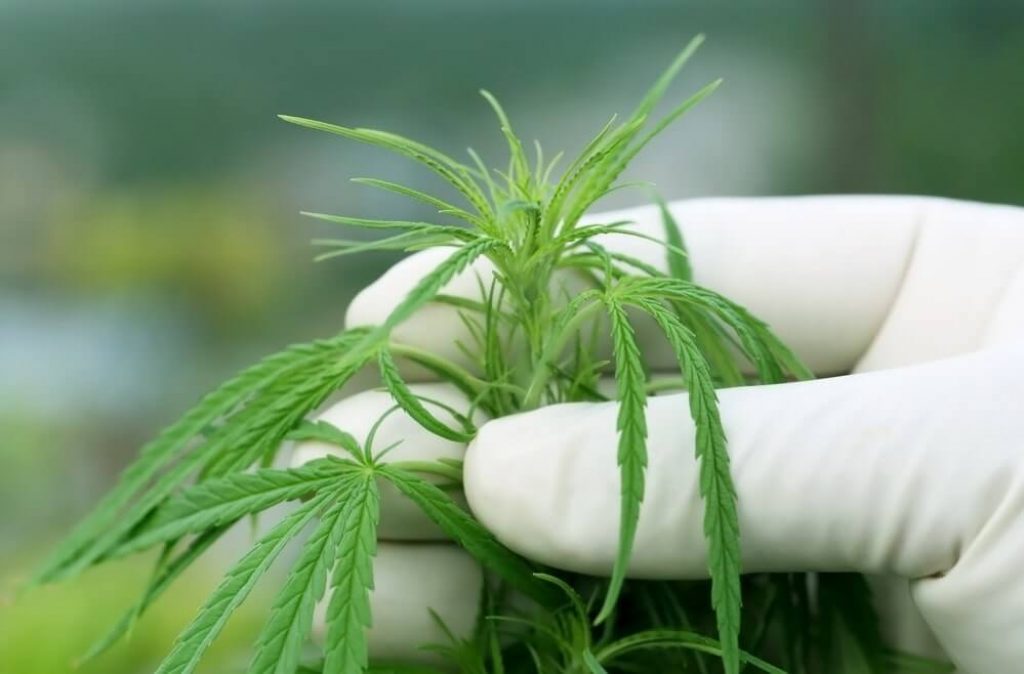 If your plants are experiencing nitrogen toxicity, it’s important not to respond in an equally harmful manner. After all, they are already experiencing a good deal of stress. You’ll need to lower the nutrient dosage your weed is receiving, but not eliminate it altogether. Instead, cut the dosage in half, and then keep an eye on how your plants respond.

Take things slowly and watch to see if your leaves stop forming claws and if their natural color returns. That will be the best indication that your plants are on the mend.

When it comes to growing weed, knowledge is power. Once you understand the different levels of nitrogen cannabis plants require during the various stages of development, you can help to prevent nitrogen toxicity by providing them with the correct amounts they need at the correct times.

Additionally, as noted earlier, nitrogen travels easily throughout the plant to be used where it is most needed. During the flowering/blooming stage, plants focus their energy on the development of buds and will pull nitrogen stored in the leaves.

Often this will cause them to turn yellow. Novice growers might be inclined to worry that their plants are experiencing nitrogen deficiency and load their flowering plants up on the nutrient at a time when they really don’t need it. Now that you know better, you won’t do that, will you?

Just when you thought you knew everything about growing weed, something new pops up that creates a challenge. But, of course, knowledge is power. The more you know what to look for and how to act to keep your plants healthy, the better chance you have of growing a wicked good crop.

A Complete Guide To CBD Oil