How Much Does It Cost to Grow Weed?

Thinking about starting your own growing operation? Not a handful of plants in your bedroom closet, but a real, professional, large-scale operation? If so, there are a lot of factors to consider.

Indoors or outdoors? Hydroponics? Aeroponics? In the soil? What kind of nutrients will you use? What kind of equipment do you need? And, of course, the killer question–Is it legal in your state?

These are just a handful of considerations when trying to figure out the cost of getting started professionally. Still, want to try?

Growing Your Own Cannabis – Is It Expensive?

Starting a grow operation from the ground up certainly isn’t cheap. And where you choose to grow your plants will have the greatest impact on your costs.

Indoor growing requires a far greater investment from rental space, to lighting, to ventilation equipment, and more. Growing in greenhouses or in a combination indoor/outdoor arrangement affords a step down in costs, with outdoor growing being the most economical choice of all.

How Much Does Growing Cannabis Indoors Cost?

So even though we told you that growing indoors is the most expensive choice, you still choose to go that route?

Actually, it’s not surprising. Despite the initial outlay, growing indoors allows you to control all of the factors that impact your plants’ growth.

It also allows you the ability to grow year-round. And indoor-grown also tends to be of better quality so it fetches a better price than outdoor-grown weed.

How much it will cost you to get started with an indoor grow operation depends on a number of factors, but it is not unreasonable to expect an initial outlay in the neighborhood of $20,000.

The Space to Grow

Additionally, not all landlords with that kind of space to let may be enthusiastic about renting out to cannabis growers. The associated smells that emanate from such operations don’t always sit well with neighbors. It’s also a NIMBY thing.

According to Statistas, a leading provider of market and consumer data, the median average cost in 2020 to grow a pound of dried cannabis flower in a U.S. warehouse was $472. Compare that to a median average of $214 to grow the same amount outdoors.

When it comes to growing cannabis indoors, few things are more essential than lights. And here there is a wide range of options to choose from. LED lights, Compact Fluorescent Lights (CFLs), and High-Pressure Sodium (HPS) lights are some of your most common.

If you want the most bang for your buck, LED lights are largely the way to go. These cost-effective lights become fully lit much faster than CFLs and they generate a lot less heat than their HPS cousins, meaning you’ll need to use less water.

LED lights will only cover a certain amount of area, so how many you’ll need will depend on the number of plants you plan to grow. You can find plenty of guidance online about the number you’ll need but plan on setting aside several thousands of dollars for your purchase.

Have you ever wondered how humans survived before fans and air conditioning? Your plants can’t be allowed to suffer either. 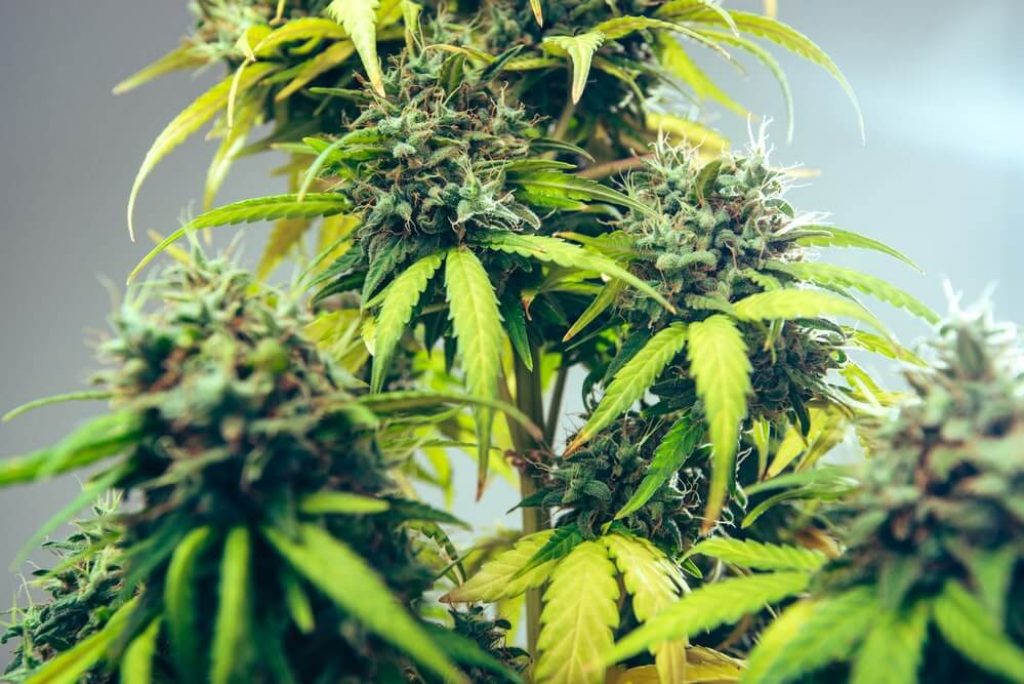 Startup costs for good fans for air circulation and ventilation can generally run you about $100 each. So budget at least $1,000 plus for that requirement, plus another $1,000 to $3,000 for humidifiers and other ventilation equipment.

Cannabis can be grown in water or in the air, but the soil remains the easiest and least expensive medium to use. Sure it’s heavy to lug around, but it’s still the most natural way to grow cannabis having been done that way for thousands upon thousands of years.

Soil-grown cannabis arguably has a better taste than cannabis grown in water. Plus, the water you use if you grow hydroponically must be discarded while your soil can be reused.

You probably know all about nitrogen, phosphorous, and potassium (NPK), the trio of essential macronutrients found incomplete fertilizers. If you want your plants to produce a good yield, you’ll want to use the best organic nutrients available and feed your plants the right amounts at the right times throughout their growing cycle.

How much your nutrients will cost depends on the size of the crop you plan to raise, but for budgeting purposes, it’s best to figure on at least $1,000 per harvest.

Loose, rich, soil jam-packed with nutrients and organic matter is another grow essential for your operation, and naturally, it comes at a cost. You can find multiple “Top-Ten” or “most popular” soils online for growing cannabis.

So how much should you expect to spend on soil? This is just an example, but if you use a 10-gallon smart pot per plant, each will require about 1.34 cubic feet of soil.

Don’t forget the pots you’ll have to put the soil in. Figure $10 each on those as well.

The cost of electricity is always a major concern. And it’s not just the shell-out of electricity for lights. Your fans and other ventilation equipment will also add to your bottom line costs. You could be looking at as much as $2,000 a month or more.

How Much Does Growing Cannabis Outdoors Cost?

As noted earlier, if you need to rent industrial space, growing indoors will cost a whole lot more than growing outdoors. And it’s not just the space you’ll spend more on, but also lighting, ventilation, and other essentials.

Growing cannabis outdoors costs significantly less on average. How much? Experts figure outdoor grows will cost anywhere from $10 to $17 per square foot, compared to $75 per square foot indoors. 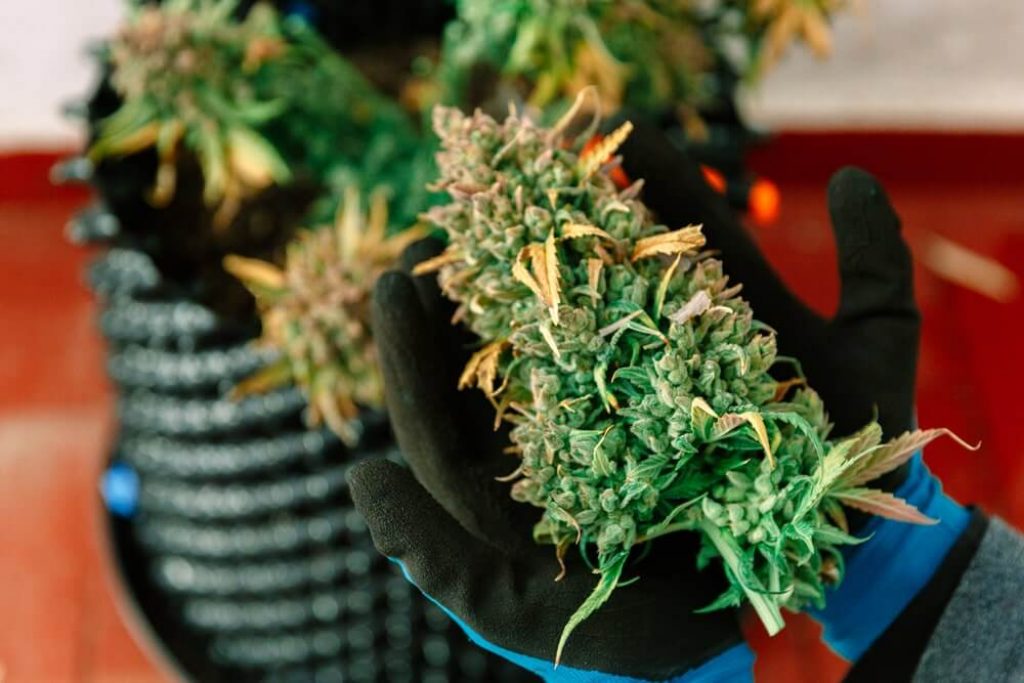 An alternative is to go with a greenhouse or combination indoor/outdoor grow. The average cost for this type of practice falls in the middle at about $50 per square foot.

So outdoor growing is definitely cheaper, but on the flip side, depending on the climate you live in, you may only be able to count on a single crop if you grow outdoors. Plus, a season of foul weather can single-handedly destroy that one yield.

Best keep your day job–at least in the beginning–if you grow outside.

How Long Until I Break Even?

That’s the tough part. Much of it comes down to how you build your operation and how much attention you give to it.

In many states when growing became legalized, enthusiastic entrepreneurs jumped on the bandwagon thinking it would be an easy way to get rich. It isn’t. If you aren’t prepared to stay in it for the long haul, it may be best to remain a hobbyist.

Can Growing Cannabis Be Profitable?

It can. But you have to know what you’re doing and be committed to making the investment.

It also helps if you have the ultimate guide to growing cannabis right by your side. Take it slow and get educated first.

To Sum Everything Up

So there you go! Still, think you have what it takes to start a commercial cannabis growing operation?

Keep in mind that we left a few things out of the equation here–the cost of seeds or clones to get you started as well as the state licensing fees to have such an operation. Those fees can be steep, so hopefully, you have deep pockets.

Fastest Ways to Get THC Out of Your System

How to Get Higher