How To Smoke Weed Out Of A Hookah

A method of smoking that extends back hundreds of years, the hookah has been utilized as an elaborate way to smoke cannabis, tobacco, or a number of other drugs. Deviating from the traditional pipe, the hookah stands significantly taller with a hose method of smoke delivery.

While the hookah may not be the most convenient method of smoking cannabis, it definitely stands heads and shoulders above the normal paraphernalia by offering a unique experience in a stylish form factor.

Below we will break down everything you need to know about the hookah, as well as how you can use it to smoke your own cannabis at home.

What Is A Hookah?

Invented after the introduction of tobacco throughout India, the hookah is a large and somewhat elaborate way to smoke various drugs or types of tobacco. Shisha, a mix of tobacco and various flavorings, is what you will most commonly find being smoked in a hookah in commercial bars and shops. 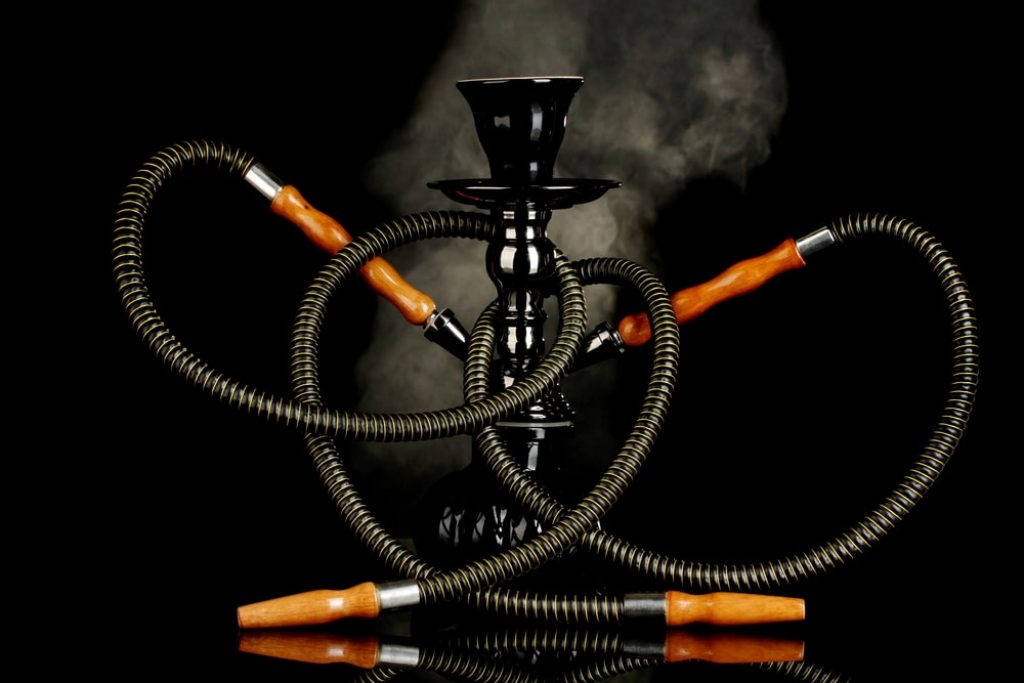 This doesn’t exclude you from smoking cannabis, however, with a hookah producing the same smoke quantity as other pipes. This is accomplished due to the unique method of heating and burning the cannabis via coals, while also having the water cleansing and cooling effects similar to a bong.

Additionally, hookah is smoked through a long hose and mouth piece, with many coming with multiple hoses for more than one smoker. Because of the large form factor and method of smoking through a hose, hookah is often seen as a more social way to smoke weed or tobacco.

Can I Smoke Weed Out Of A Hookah Pen?

A hookah pen is basically a miniature version of a normal hookah. It looks similar to a vape pen and is meant to be used to smoke shisha.

You can use it to smoke marijuana as well but we’d recommend using a quality vape pen instead. They’re meant for cannabis and allow a finer control over the temperature.

How Do You Use A Hookah?

Because smoking through a hookah is not as intuitive as a normal pipe or joint, it can be quite overwhelming if it is your first time building and using one. There are a number of components to the hookah, which are as follows:

The bowl on a hookah is similar to the bowl on a weed or tobacco pipe, acting as the place to pack your tobacco or cannabis. The bowl is located at the top of the hookah, coming in various styles and materials depending on your specific pipe.

This will be heated by coals (which we will discuss next), drawing smoke through the shaft of the pipe into the base. This will then be drawn through the one, or multiple, hoses while you smoke.

Unique to the hookah, instead of direct lighting the tobacco or cannabis you will instead place coal on the top of the bowl. By using either a prepackaged aluminum cover or your own homemade foil, you will cover the top of the weed filled bowl and puncture a number of holes in the top for heating and ventilation.

You can then use fast lighting or traditional coals, being heated up through their own appropriate methods. Once heated to a red hot glow, they can then be placed on top of the tin foil, adjusting as you see fit if your hit is too hot or isn’t producing enough smoke.

Sitting below the bowl, the coal tray is simply a place for your hot or broken down coals. As you smoke through the hookah, the coals will naturally break down into ash. 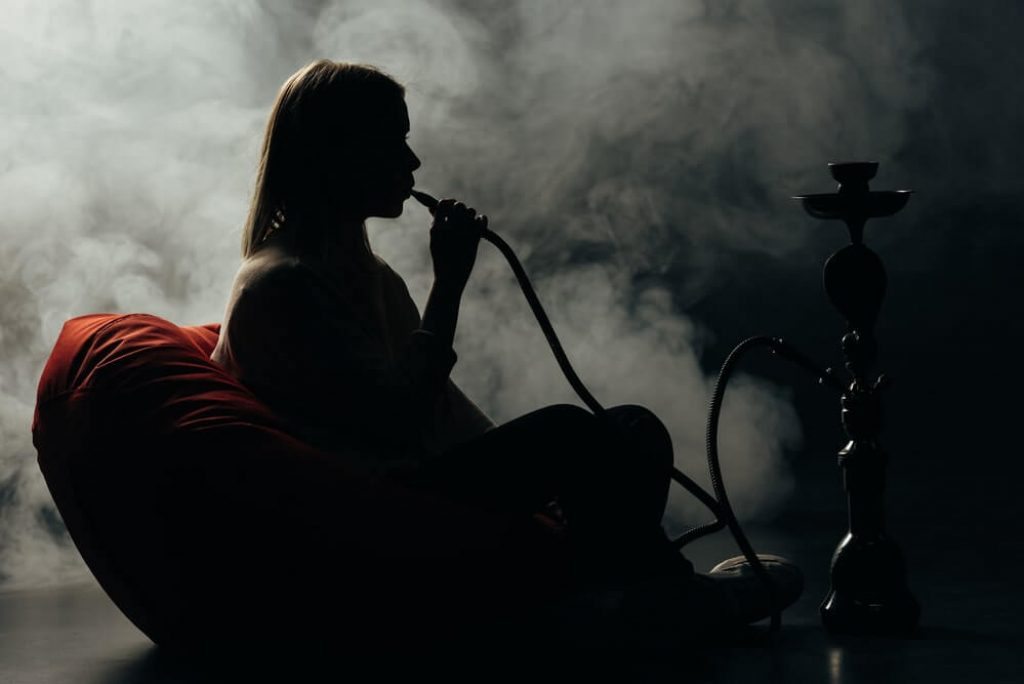 When the coal begins to crumble, simply drop or tap the coal into the coal tray to remove the excess. You can also place your coals on this tray if your hit becomes too hot and you need less direct heat to the bowl.

Much like a water bong, the base of a hookah acts to both filter and cool the smoke for a smoother hit. It is recommended to put enough water to reach about an inch and half above your downstem, with too little water causing a loose and harsh hit and too much causing a tighter pull with less smoke.

Depending on whether your hookah has one or multiple hose ports, you will be able to attach your hose with the proper grommet for a tight seal. Hoses can be made in different materials, some of which should be washed prior to use and some which may not be washed.

Always check the details of your product when you are preparing your hookah for its first use.

Can You Smoke Weed In A Hookah?

While the traditional shisha tends to be somewhat different than cannabis, being slightly wet and sticky out of the package, it will not change the overall methodology to smoking out of a hookah. You simply need to grind up the buds of your weed as you normally would and place it in the bowl the same way you would with shisha or regular tobacco.

Is Using A Hookah Healthier?

There will always be risks when smoking any product, whether it is cannabis, tobacco, or any other drug. It is debated as to whether smoking in different ways can prove to be a healthier alternative to the others. 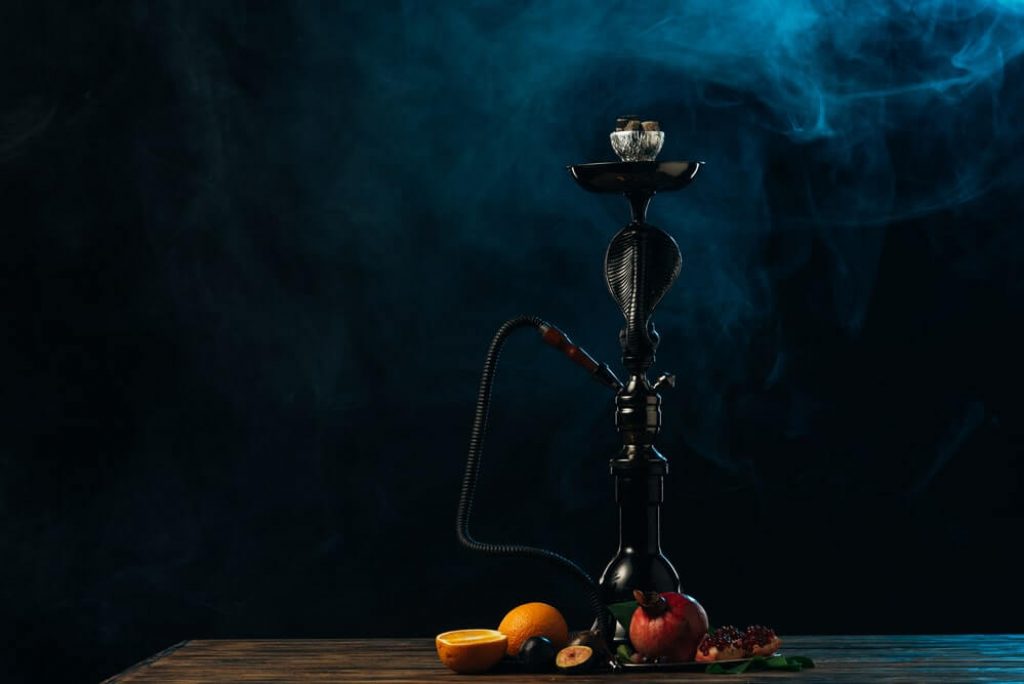 While smoking through water will help to act as a filter for the smoke, you are still at risk for many of the same risks associated with traditional smoking, including lung irritation, coughing, and black lips. In addition, there have been reports of the increased carbon monoxide intake due to the use of coals to heat up the weed or shisha.

What do you smoke in a hookah?

The most common use of a hookah is to smoke shisha which is a flavored tobacco.

Shisha is a mix of tobacco and molasses which gives it a sticky texture.

The molasses can be combined with a huge variety of flavors giving each shisha it’s own distinct flavor.

No, hookah is not weed. Hookah is a device used to smoke shisha, which is a form of tobacco. Hookah has nothing to do with marijuana other than the fact that it can also be used similar to a bong.

No, shisha is just tobacco mixed with flavoring. There is no THC in it and it is not a cannabis based product.

Does hookah get you high?

No, again, shisha is tobacco. There’s no THC or any other psychoactive compounds in it.

Can you mix shisha and weed?

Is smoking through a hookah the same as vaping?

Smoking through a hookah is not the same as vaping, with both having different methods of creating their respective smoke and vapor. Hookah is more similar to a water bong or pipe, still creating smoke through traditional combustion.

Vaporizers act to heat and vaporize the oils found in THC products, which doesn’t carry the same effect as the particles produced from smoking.

Do you get high from smoking a hookah?

If you intend on smoking cannabis through your hookah then you will obviously experience the same high you would get off any other water pipe, although these effects will vary depending on your genetics. In terms of traditional tobacco or shisha, however, you may feel an increased nicotine buzz due to the higher quantities usually inhaled.

Unlike a cigarettes or e-cigarettes, the flavoring and increased social aspect of smoking through a hookah will typically result in excessive intake of nicotine. If you are not accustomed to high levels of nicotine, it is possible you will experience a strong buzz.

This buzz you feel will obviously vary depending on the type of tobacco you are smoking.

It is widely debated as to how much healthier certain ways of smoking fall across the scale of cannabis use. In theory, however, the more you filter or eliminate your exposure to direct smoke the ‘healthier’ it will be.

Smoking through a hookah will be about as healthy as smoking through a water bong, with the water acting to filter out some of the smoke particles.  The healthiest methods to consume cannabis will come with the tinctures, sprays, and edibles, as these do not involve any form of smoking.

How do you use a hookah?

Explaining how to use a hookah in text would be extremely difficult to do so just watch this video instead.

The Differences Between Cyco Nutrients and Advanced Nutrients