About 25 million Americans suffer from asthma, a chronic condition of the respiratory system that affects the airways of the lungs causing them to swell. Sometimes the condition is mildly irritating with only occasional flare-ups.

Other times, it can be frequent and cause a shortness of breath, chest pains, wheezing, and coughing. A full-blown asthma attack can result in heavy coughing fits and serious breathing difficulties.

A person who has asthma has very sensitive airways that may narrow suddenly if triggered. Common triggers may include exposure to:

Asthma attacks may also be triggered by certain medications, by a cold or flu, or as a result of sudden emotional feelings of excitement or stress.

What Are the Traditional Remedies for Asthma (Not Cannabis Related)?

There is no cure for asthma, so most traditional remedies focus on helping asthma sufferers manage their symptoms. There are different types of remedies including those that address the condition long term, quick-relief or rescue treatments, allergy shots and oral medications for allergy-induced asthma attacks, and injections of biologics for some severe cases.

Quick-relief or rescue inhalers are most often used for those who experience sudden attacks, as they can quickly deliver asthma medication to the lungs. Nebulizers are another option.

These devices turn liquid medications into a fine mist that is easier for some to take into the lungs. 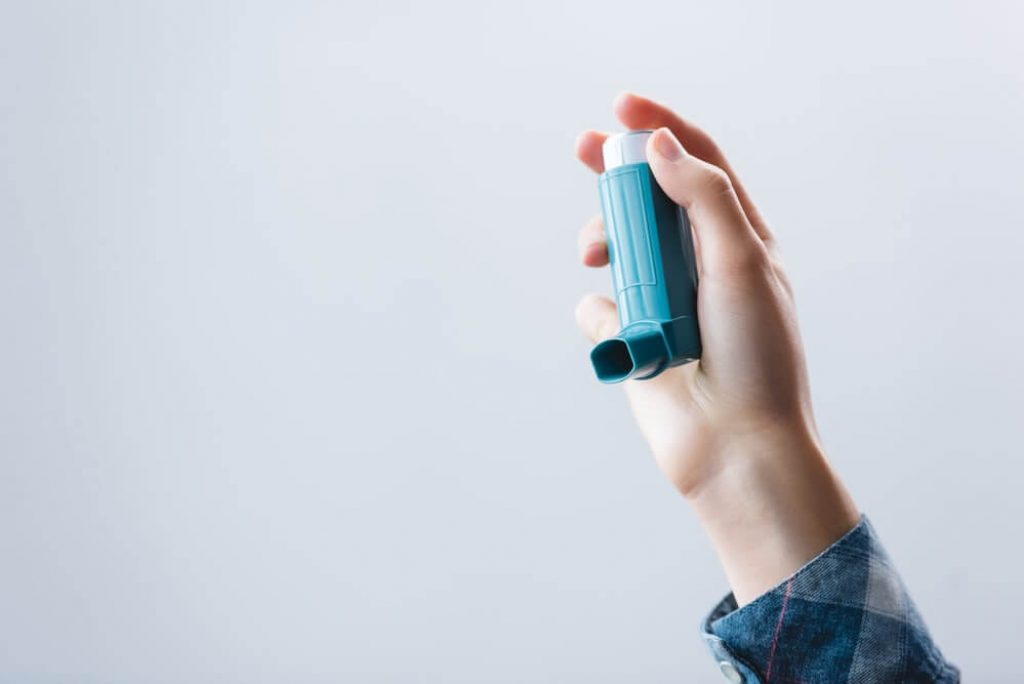 If you have asthma, your doctor may also encourage you to practice certain beneficial breathing exercises that can help reduce your reliance on inhalers. Some herbal/natural remedies may help as well.

Perhaps most importantly, people who have asthma are cautioned to avoid the triggers that bring on attacks in the first place. Keeping their living environment clean and dust free, closing windows when pollen is likely to be in the air, and avoiding pet dander can go a long way to protecting against attacks.

Medical Research on Marijuana for Asthma

Research on the medical benefits of marijuana seem to advance in baby steps, and yet, bit by bit, it comes forward, often producing some surprising finds. Through various studies, we’ve learned that marijuana has anti-anxiety and anti-inflammatory properties. We’ve found it useful for managing pain and for helping people with eating disorders.

It’s also an anti-spasmodic agent. Through studies, we’ve even learned how marijuana interacts with antibiotics.

But is it helpful for treating asthma?

A study from 1976 found that the cannabinoid THC in marijuana, the same one that produces that wonderful euphoric feeling, also happens to mimic salbutamol, a drug commonly used to treat asthma and COPD, by working as a bronchodilator to open up medium and large airways in the lungs.

But before you go reaching for a joint to help relieve your asthma symptoms, you should be aware that this study did not involve actually smoking the cannabis involved. Instead it was sprayed into subjects’ mouths like an aerosol. 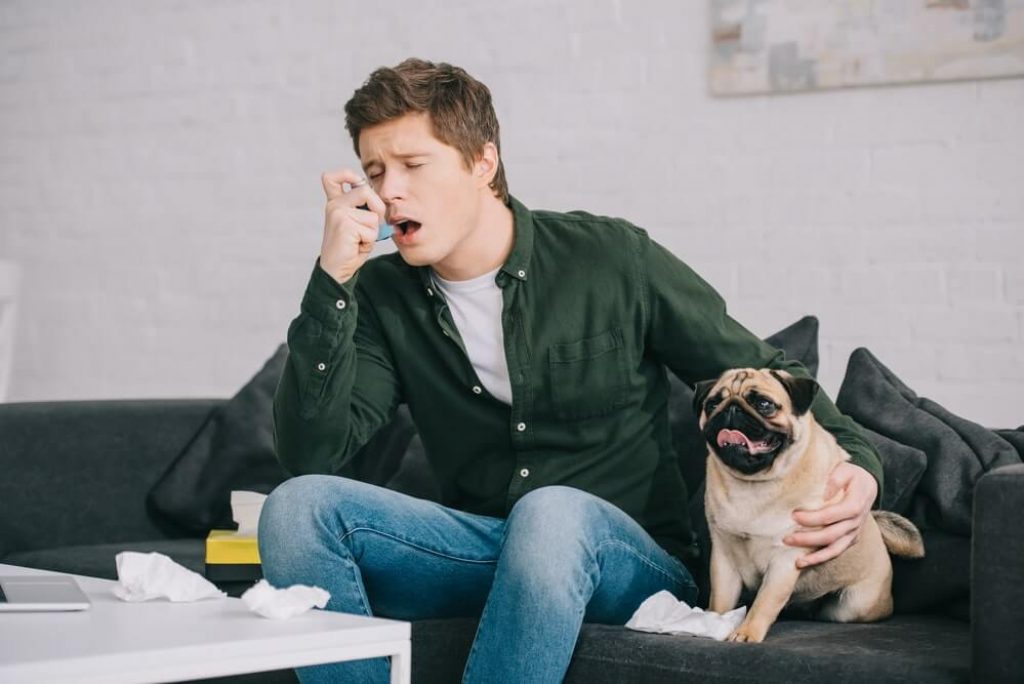 In 1975 UCLA Medicine professor Dr. Donald Tashkin and a team of researchers studied the effects of smoking marijuana on the airways of a group of eight people with clinically stable bronchial asthma. The results of their study found that the THC in smoked cannabis immediately corrected their bronchospasms.

But it’s not just THC being studied. An article published in 2012 in the European Journal of Pharmacology looked at the non-psychoactive cannabinoid CBD finding it to be effective in decreasing inflammation as a result of lung injuries. And a 2015 study in Mediators of Inflammation found CBD helps reduce the secretion of mucus.

These are all promising studies. That’s the interesting thing about medical research. Knowledge is often gained in fits and starts.

Potential Benefits of Marijuana for Asthma

Because asthma causes inflammation of the airways of the lungs, most marijuana/asthma studies have focused on the anti-inflammatory qualities of the cannabinoids found in marijuana, particularly in supplemental form. Cannabinoids have already proven effective in treating such conditions as arthritis and multiple sclerosis.

For those who suffer from allergic asthma, there has also been some promising research.

This study, supported by the National Heart, Lung, and Blood Institute and conducted over 29 years, evaluated the lung function of young, moderate tobacco and marijuana users.

Interestingly, while tobacco users experienced a drop in lung function over time, the lung function of marijuana smokers actually improved. This did not, however, extend to those who smoked weed more heavily.

The results of the study suggests that those who smoke marijuana only occasionally or moderately do not incur long term adverse affects to lung functioning.

Potential Risks of Marijuana for Asthma

For every study that points to potential benefits of marijuana for asthma, however, there are others that draw a direct correlation between marijuana use and increased risk of asthma attacks. The subject remains controversial.

It would seem to be a no-brainer that smoking of any kind is not good for the lungs. For asthmatics whose airways are already impaired, smoking often only makes their condition worse and can even cause lung infections.

Smoking weed with asthma isn’t good in the short term either as it often brings on frequent coughing, wheezing, and a shortness of breath.

Worse, smoking marijuana can cause the development of large air sacs called bullae in the lungs. This can cause further shortness of breath. And if the bullae rupture, the result can be deadly.

A Better Way for Asthma Sufferers to Use Marijuana

Taking CBD oil or edibles can help with relieving inflammation caused by asthma. However, as a quick remedy for an attack, they aren’t much use.

However, more research still needs to be done on the subject.

On the federal level, marijuana is illegal and classified as a Schedule 1 drug, and it has not been approved by the FDA. However, individual states have made their own legal rulings.

If you suffer from asthma and would like to explore the benefits of marijuana use with asthma, it’s important to know that medical marijuana has been legalized in 33 states, the District of Columbia, and four U.S. territories.

In addition, Indian Reservations have the legal right to make their own legal determinations. Several states have also legalized recreational marijuana, and the trend across the board has been in the direction of legalization.

However, we’re not there yet. Make sure you know where your own state or territory stands on the issue.

Final Thoughts on the Discussion of Marijuana Treatment for Asthma

It’s a proven fact that marijuana contains some anti-inflammatory properties, and so it’s natural to wonder if smoking weed might aid in lessening inflammation caused by asthma.

However, despite varying studies both pro and con, at the end of the day smoking of any kind is not recommended if you have a lung condition. And while vaping may be a less harmful second choice, there has simply not been enough research on its long term effects to outright recommend it.

If you want to experiment with the benefits of cannabinoids, edibles and oils remain your best option. They’ll take longer to work, but you won’t have to worry that your ingesting them may cause your lungs further harm.

Whatever you’re considering as a treatment for asthma, however, be sure to discuss it with your doctor first. If you’re concerned your doctor can tell you smoke weed and will somehow hold it against you, don’t be.

Doctors as a whole just want to ensure their patients get the best of care and your providing them with a full picture of your health and habits will help them to best do so.

Hope that helps you breathe easier!